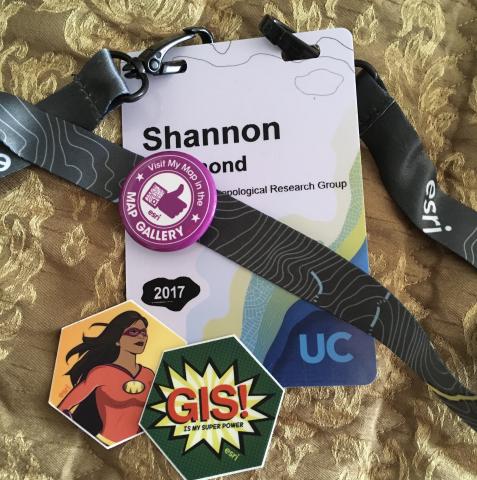 I return from ESRI UC, alternatively titled "18,000 Introverts in Cargo Shorts." But in a good way.

This was my third trip to UC. I always enjoy it. Here are some of the highlights.

Map Gallery
My boss and I entered two maps into the Map Gallery. This was the first time I'd ever done that before. I had good fun putting a map together where I actually had time to futz with the cartography. The futzing can go too far. There were several nights where I was still nudging label annotation around before I looked up and saw that it was well past midnight. I felt very silly standing the required time next to my map at the opening reception on Monday night, like a fairly unsuccessful Vanna White impersonation. But it was very cool to see our maps up on the wall, and then, even cooler, was to see one of them up on the big screen at the closing session on Friday. Modeling the Prehistoric Extent of San Francisco Bay and Potential for Cultural Resources took first place in the Analytic Map category! Huzzah! We return to the office as heroes! Well, not really, but it was exceptional cool to hear my company recognized for excellent analytics in front of thousands of people. 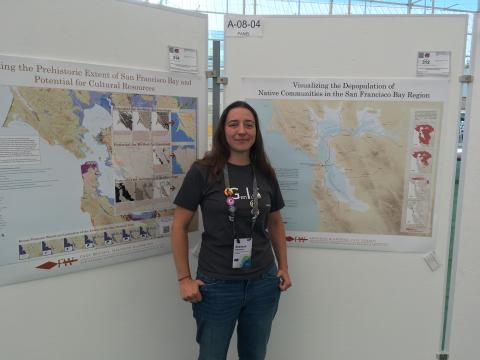 There's a story map version of our map if you'd like to get it out.

I Am Island
If you've never been to UC before, there are clumped table islands on the main floor, flagged with different software packages and extensions from the ESRI suite, each with a handful of folks there ready to help you sort out your problems. Not Tier 1 folks either. These are people who know their stuff. Often they're the people who wrote your stuff, actually. It's the primary reason I go. I start my list of questions months beforehand. I spent my downtime between sessions bouncing between the JavaScript API and Web AppBuilder islands and got a large chunk of coding detritus sorted. Shout out to Gavin Rehkemper for fixing at least four of problems with persistence and a smile. ESRI, give that guy a raise.

It Takes A Community…
I'm a little more involved in my local geo communities than I have been in the past, particularly the dev community, which as it turns out, is full of easy-going, useful people. As a result, this was the first conference I attended where I actually knew people there besides my one buddy from the office. It was pretty rad to go grab a beer in the evenings with good folk and talk about GIS-related whatever. I mean, my past routine of sitting in my hotel room and watching Firefly reruns was cool too, but I can do that whenever.

Not This Ship, Sister
Did anyone figure out what was up with the books? So, as part of the conference registration, ESRI gives you a handful of new books: a map sample book, and a couple of other ESRI press kind of things. It turns out that something in one of these freebies contained something that the TSA scanners for checked baggage at the airport did not like. It would bring the conveyor belts to a full stop anytime a suitcase containing these books went by. So Sunday after the closing session something just under 18,000 of us descended upon the San Diego International Airport. When I got to the front of the check in line, the conversation went like this.

"Ma'am, did you come from that conference?"

"Ma'am, I need you to remove all the books from your bag, please."

Even that automated message about not parking in the white zone was being interrupted to say, "If you're coming back from some kind of geology conference--"

[And thousands of geeks shake their fists at the intercom speakers mounted in the ceiling.]

"--You may not check your books. I repeat, no geology books in the checked baggage."

You've got to figure something simple like an RFID tag is common enough that it couldn't wreak this kind of havoc. Now I'm not much of a conspiracy theorist, but I have to wonder, what on earth did ESRI put in my books? They're tracking us; it's the only reason for the ease of our escape…