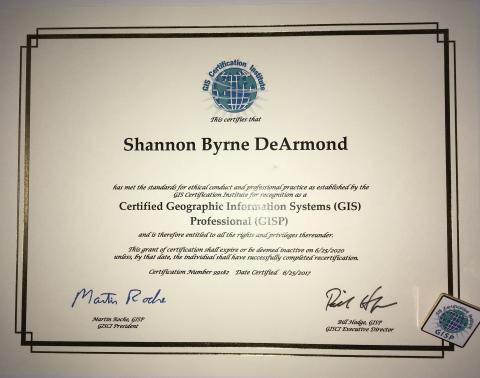 I got my GISP this year. I've been working towards it for awhile, and finally got all the points lined up and got my application approved.

If you're unfamiliar with it, GISP stands for Geographic Information Systems Professional. Basically it's a chunk of initials after your name that indicates that you know what you're doing. In order to qualify, you need at least four years work experience, you need to meet a minimum education requirement, you need to contribute to the larger geocommunity, and you have to sit a four-hour long exam.

The bit that found me wanting when I started down this path was community contributions. I'm a little introverted; that's an industry tendency so far as I can tell. Putting myself up in front of people doesn't come naturally. And while I like a good geomeetup, that whole bit where you mingle and talk to strangers is frankly terrifying.

But it’s good to scare yourself every now and again in non-lethal ways, and public speaking falls just on the benign side of that line. So I went. I met people. I gave a couple talks. The folks who listened were pretty supportive. I made some friends. I also did some tutoring. (And started a blog.) And when I went to UC this year, I actually ran into people I know.

So fast forward. My GISP application was approved. I got the pin and the certificate. (No secret handshake so far as I can tell.)

I’ve seen some threads lately on Twitter or Slack debating the value of a GISP certificate. I just wanted to put this out there. What has been valuable to me was not the certificate itself. Sure, we’re occasionally asked about our department creds for proposals at the office, and that’s one more box I can check. And it is worth noting that I did get a promotion in the months that followed my certificate acquisition. I don’t think the promotion was in direct response to my new GISP initials. But I expect that my efforts to get more involved in my field and stepping up in front of people and representing the office in a positive way had some influence.

If I were to speak frankly of the downsides of the process, it’s not cheap. Between the application and exam fees, you’re out almost $500, plus another $100 a year to keep it active. And the process takes a long time. I think my application review ended up taking 3 or 4 months.

I’m glad I did it though. The real value of the GISP to me wasn’t the end goal, but the journey along the way. I’m way more involved in my field than I was a few years ago, and I’ve found that it’s something that I really enjoy.